A Journey through Nepal: Kathmandu

Lonely Planet recently named Kathmandu, Nepal as one of the top cities to visit in 2019. I recently visited Nepal where I made the Trek to Mt Everest Base Camp so I can agree with this recommendation. My husband and I have fallen in love with the area and the people that live there. In fact, I’ve found it has been an adjustment returning to the U.S. after spending so much time there.

When I travel, I always feel I take something home with me. A lesson if you will. In Nepal, there were many. The most important being just enjoying the simplicity of living. During our trip, one challenge we had was to learn to slow down without wifi, access to work emails, daily family life, computers, or just our daily distractions. It was a challenge. But this challenge encouraged us to stop, to breathe, to take in our surroundings, to journal, to read, and to just be in nature. It allowed us time to dig deeper within ourselves.

There’s far too much to say and share about our trip so I’ve decided to share my words, photos, and videos in a series called ‘A Journey through Nepal’. I do hope you enjoy learning about a trip that forever changed our lives. 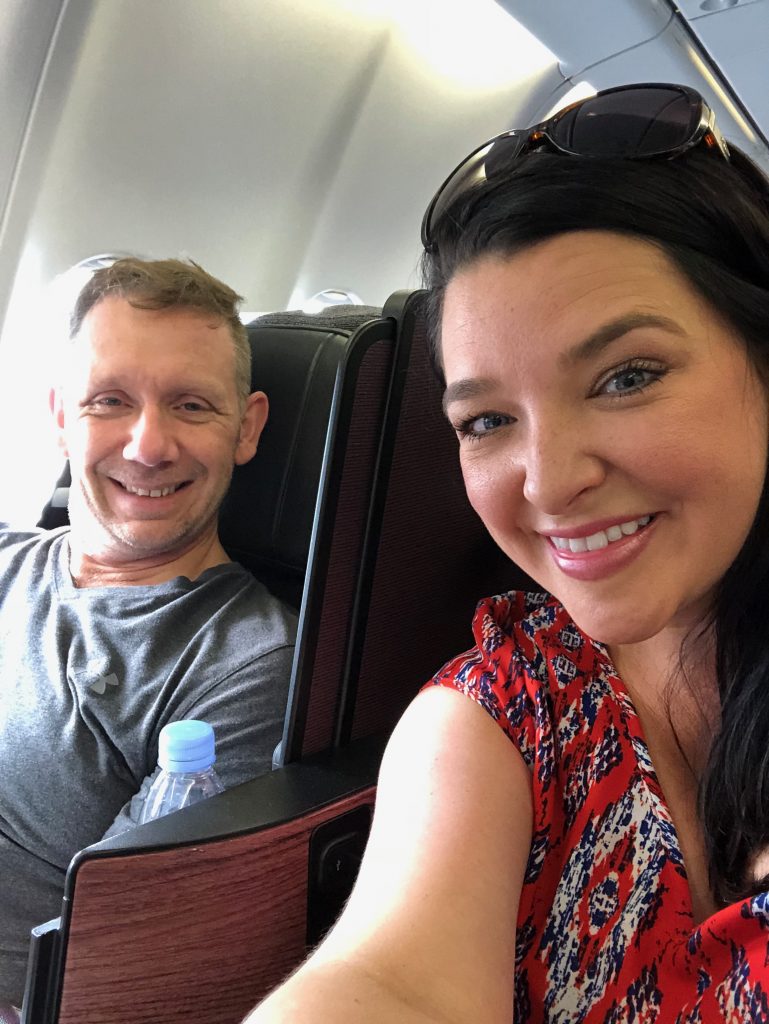 We began our long journey to Nepal in our home of Charlotte, North Carolina. It took us three flights to arrive to Kathmandu. From Charlotte to Heathrow to Doha to Kathmandu. We had a layover long enough in Doha that we decided to book an overnight room at the hotel terminal which was a brilliant idea. We were able to shower, sleep, and just walked over to the lounge for dinner. It was perfect and so easy! Qatar Airways is by far the best airlines I’ve ever flown. The staff and customer service is exceptional. If I could fly with them with each trip, I would. 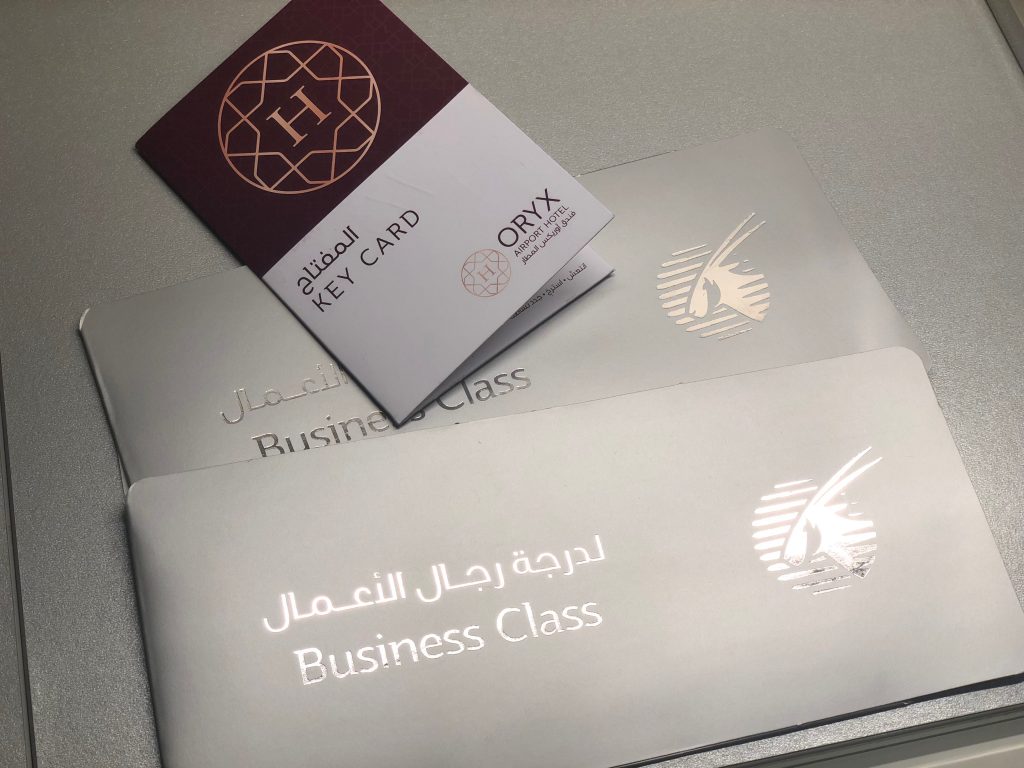 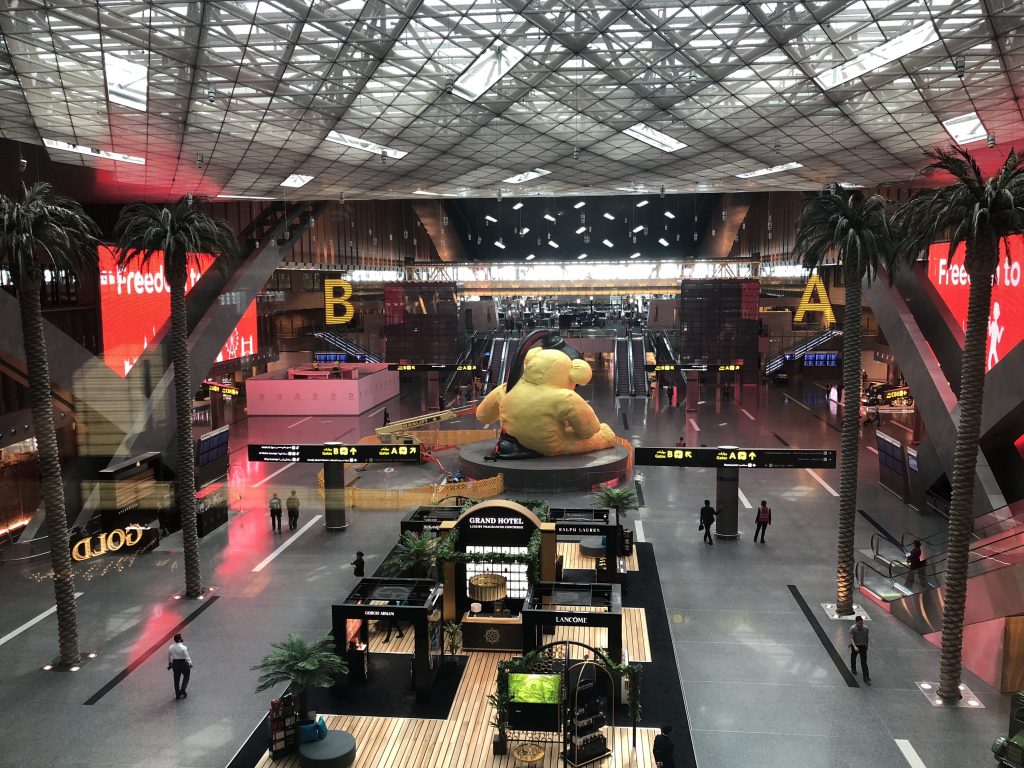 The airport in Doha reminded me of a shopping mall.

When we arrived to the airport in Kathmandu, things were a bit chaotic. We were prepared with local money and they don’t take local money for Visas which was super odd. After going through our wallets and visiting a money exchange desk, we were able to provide a combination of currency. U.S. dollars, pounds, Euros, etc. I knew all of that random money would eventually come to good use. 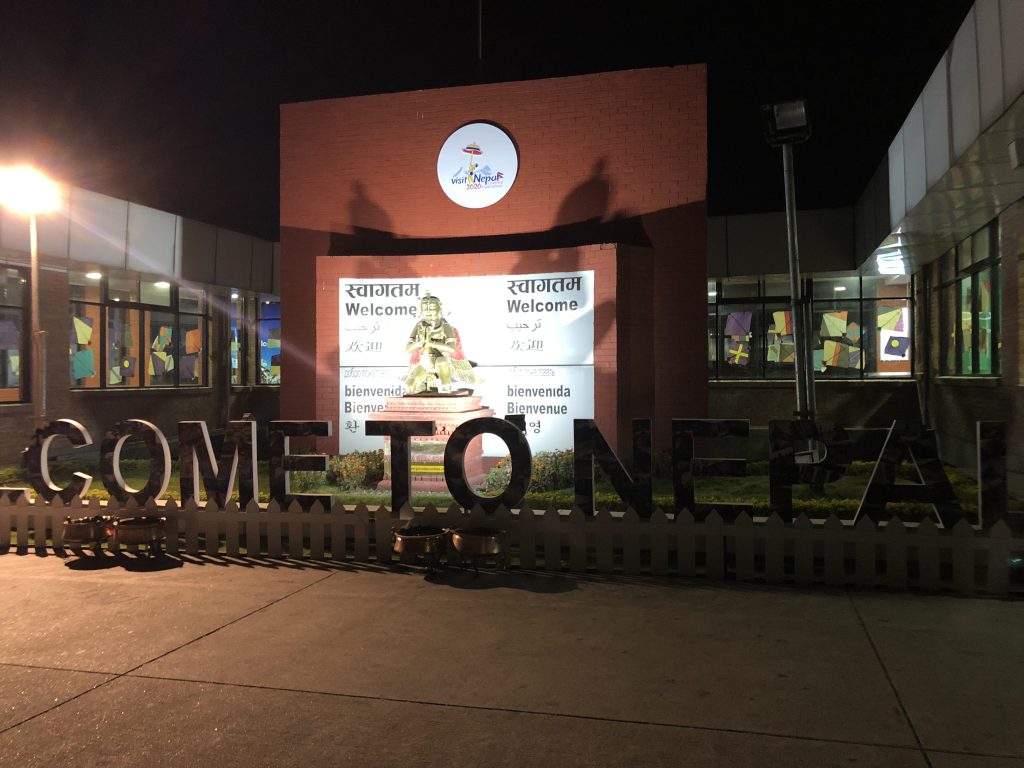 After spending what felt like a lifetime trying to obtain our visas, we then made our way to baggage pick up. I was in such a frantic moment and felt overwhelmed that I grabbed my bag but then walked off without my carry on! We didn’t notice until we were already to our transportation but thankfully security wasn’t extremely strict and they allowed me run right back in to collect my bag and it was still there. Close call. The first couple of nights in Kathmandu were low key. We had arrived early so we could get used to the time change and catch up on as much sleep as possible. It wasn’t until our second full day there that we actually got out and toured the area with our World Expeditions group should be taking on the Everest Base Camp trek together. My husband was thrilled because the entire group (4 others) were all from the U.K. He felt right at home and we were lucky that everyone hit it off immediately. This was definitely a positive since this would become our family, our support system, over the next couple of weeks during our Trek to Mt. Everest Base Camp. 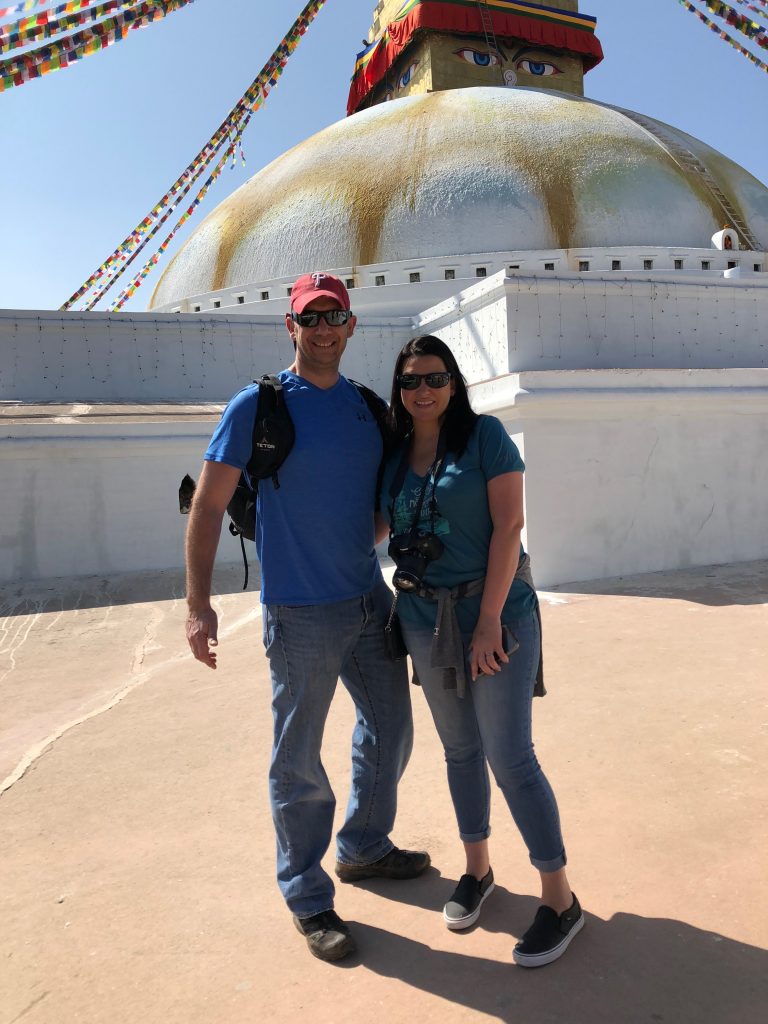 Kathmandu is an interesting city. It’s busy and there’s so much to see but pollution is present. It wasn’t uncommon to see locals wear buffers to cover their nose and mouth while walking the streets. This was probably the downfall which I quickly overlooked because I was so fascinated by the history and culture of the area. 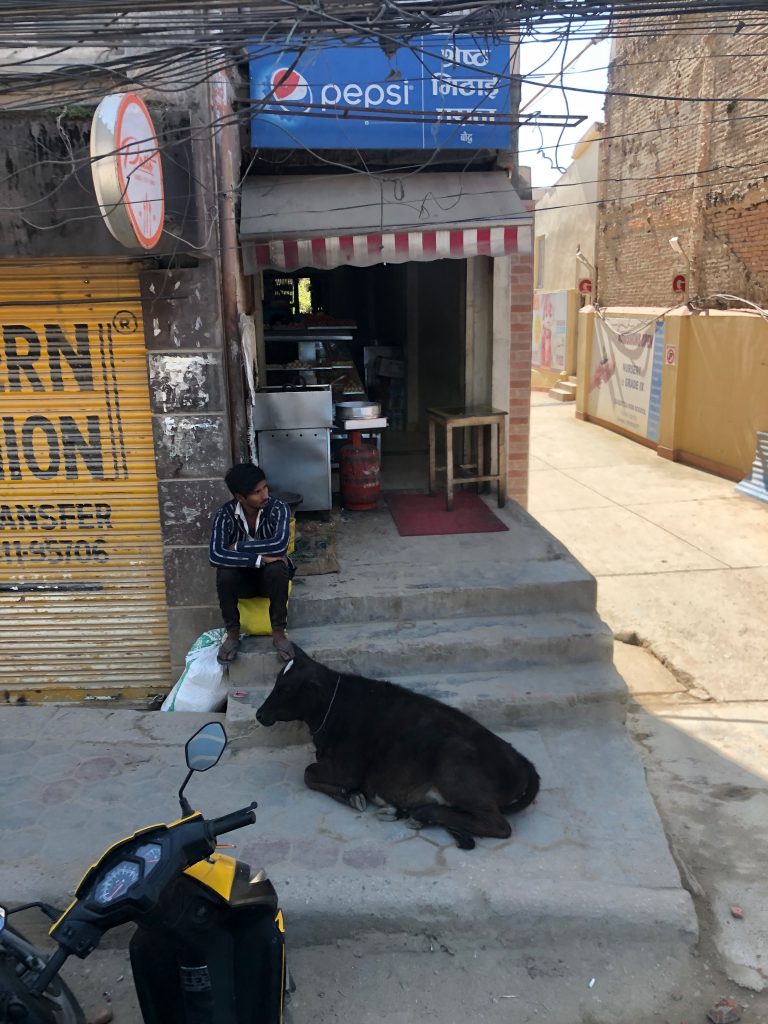 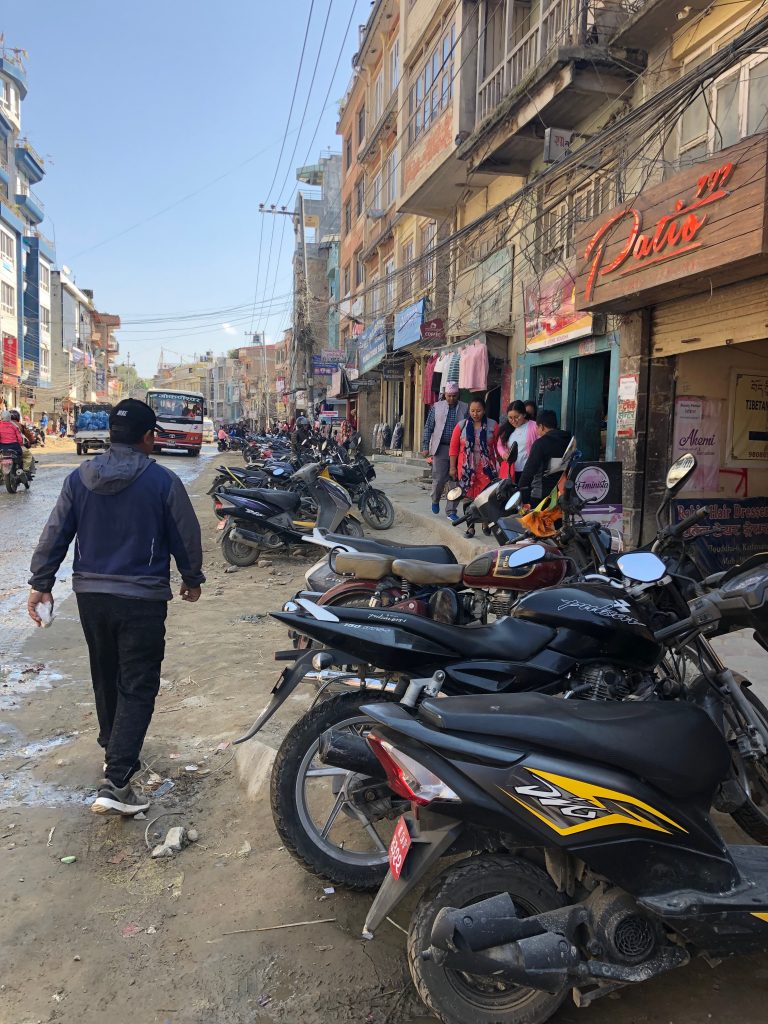 During our tour of the city, we had the opportunity to spend some time at the Boudhanath Stupa which is one of the largest Buddhist stupas in the world. It was built sometime in the 14th century. The monument which is certainly overwhelming seems to peer at you from all directions. This represents the  ‘all knowing nature’ of Buddha. I’ll be honest, as I was not as familiar with this part of the world, I had no idea I’d be seeing such a famous monument. 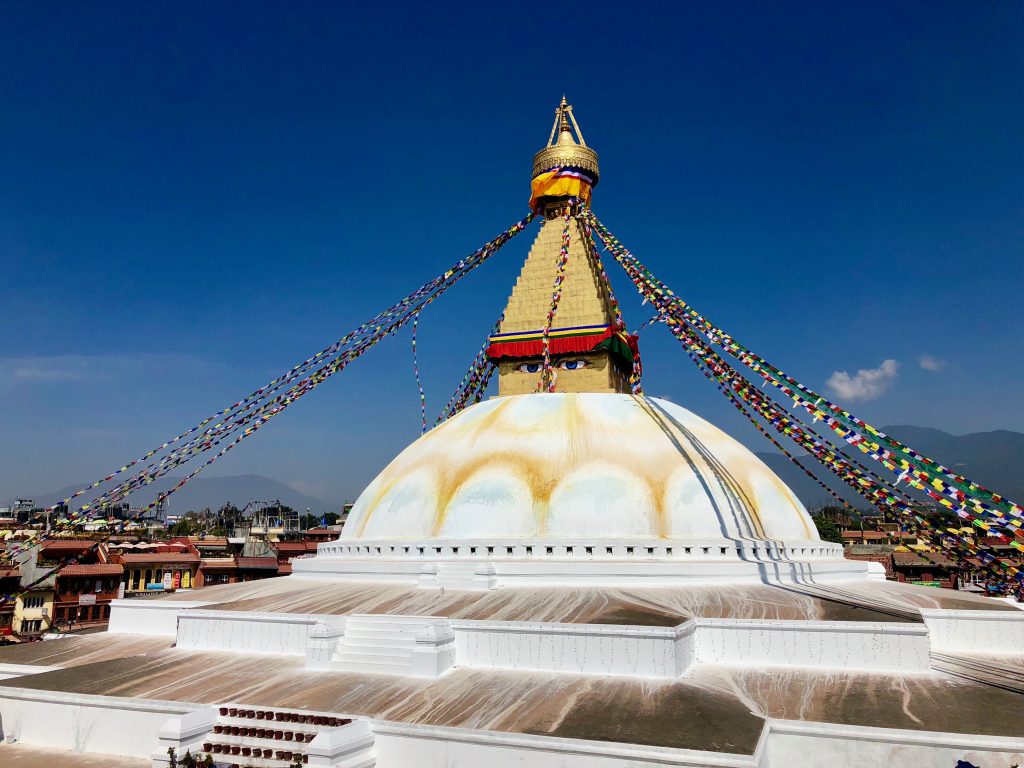 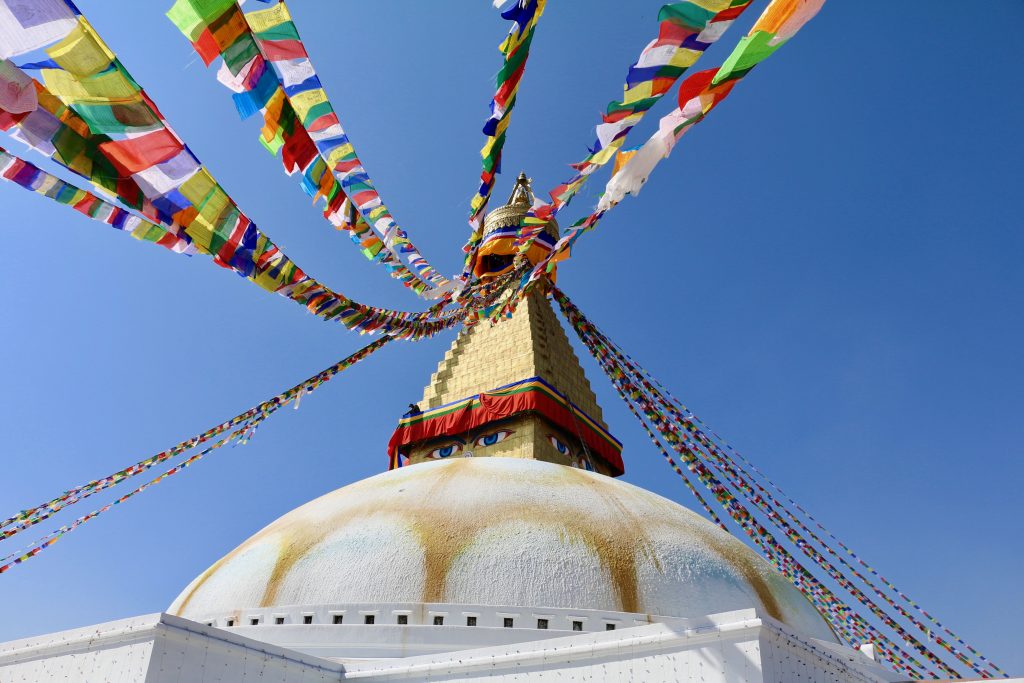 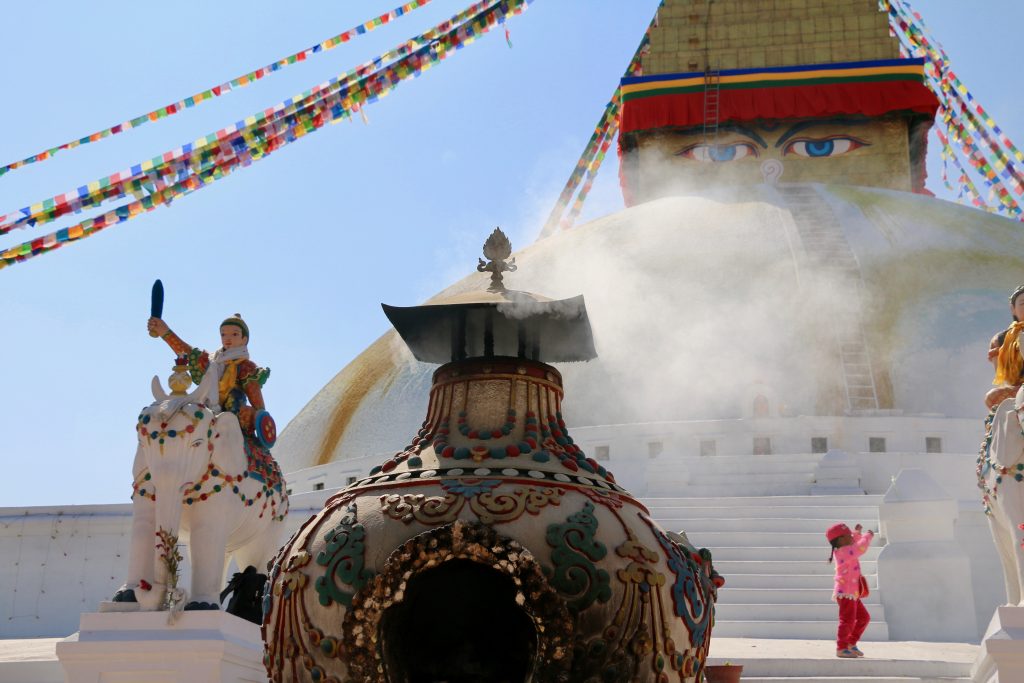 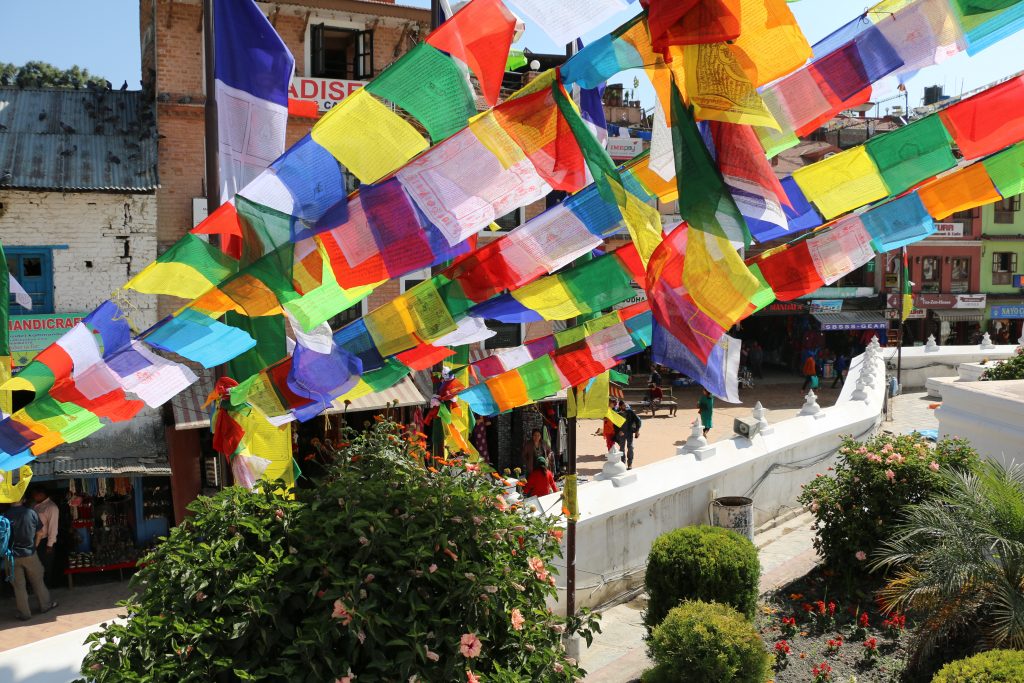 Later on in the day, we had the opportunity to visit Pashupatinath Temple, a 2,000 year old Hindu temple. My senses were on overload here. The sounds, sights, and smells were a lot to take in. I spent less time taking photos, which I now regret, and more time just observing. My new friend Coral, who was also going on the trek, and I exchanged a double take when we realized we had walked past a car with a dead body in the back. At that moment, we didn’t realize we would soon be the witnesses to ceremonies /cremations of multiple individuals along the Bagmati River. During those ceremonies, hundreds of people sat around the river, on steps, and along a bridge watching and paying their respects. I wondered if these were individuals they personally knew or if this was simply part of their culture. Many tourists snapped away on their camera but I felt awkward photographing something so sacred and personal despite the crowd gathered around. It just didn’t feel right to me. I almost felt as though I was intruding by being there. 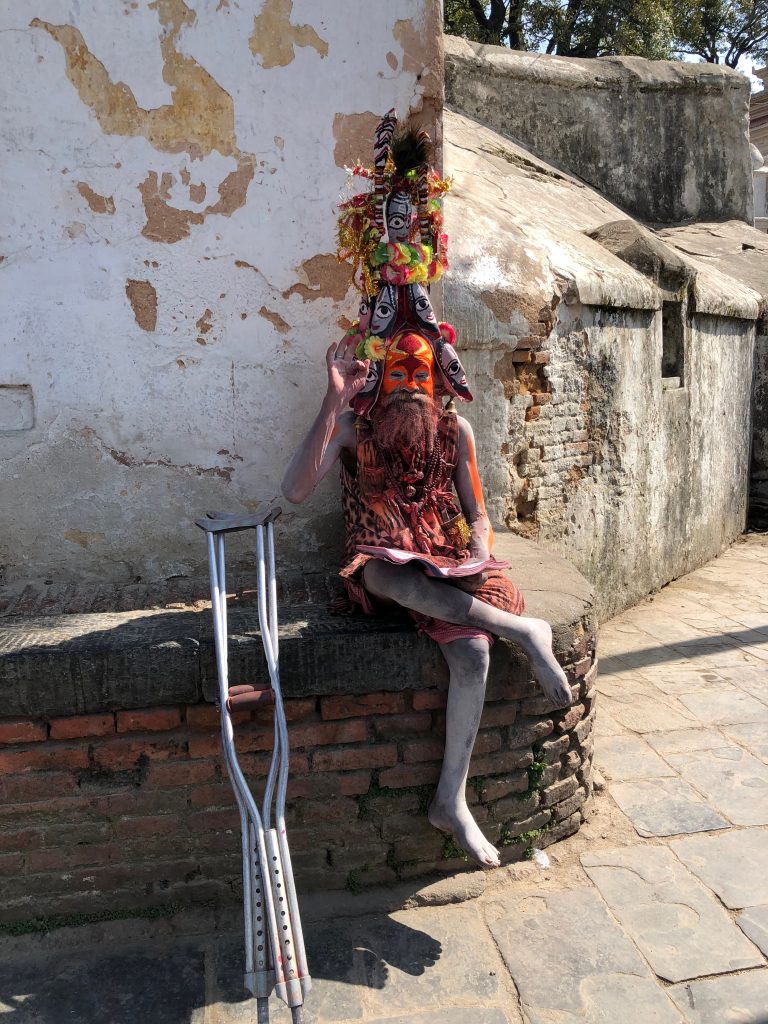 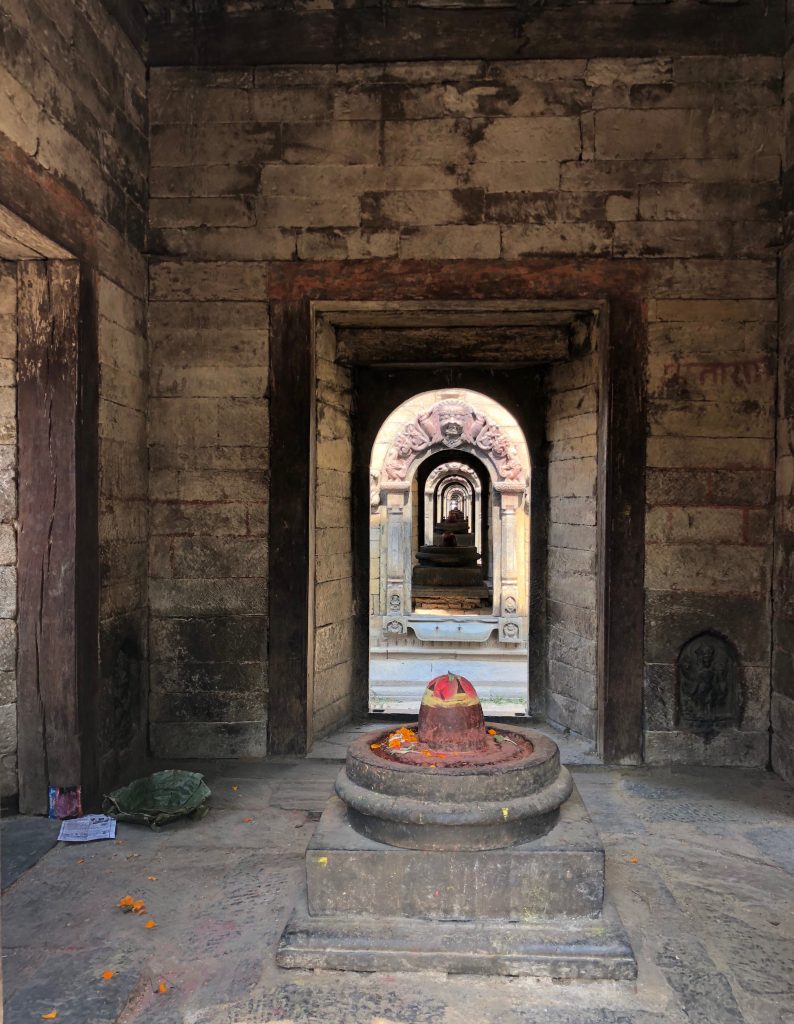 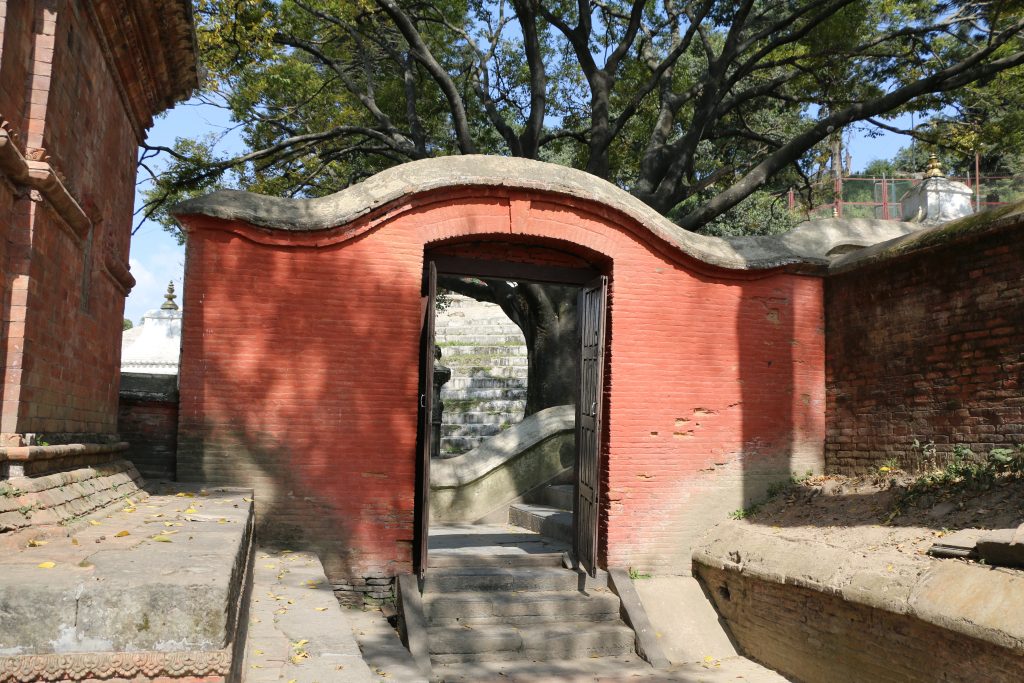 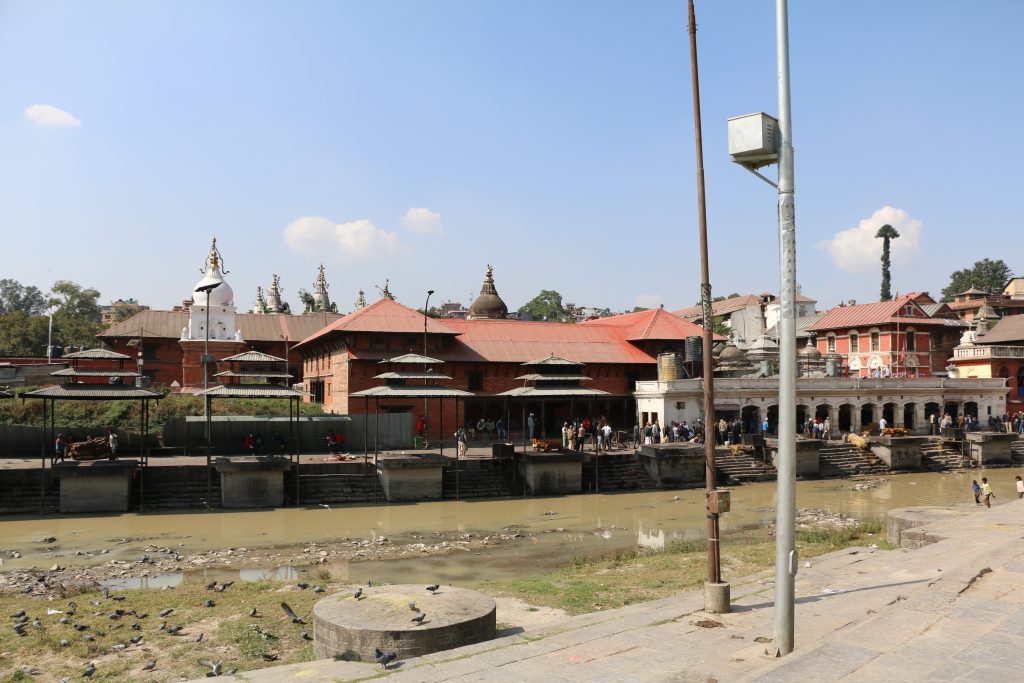 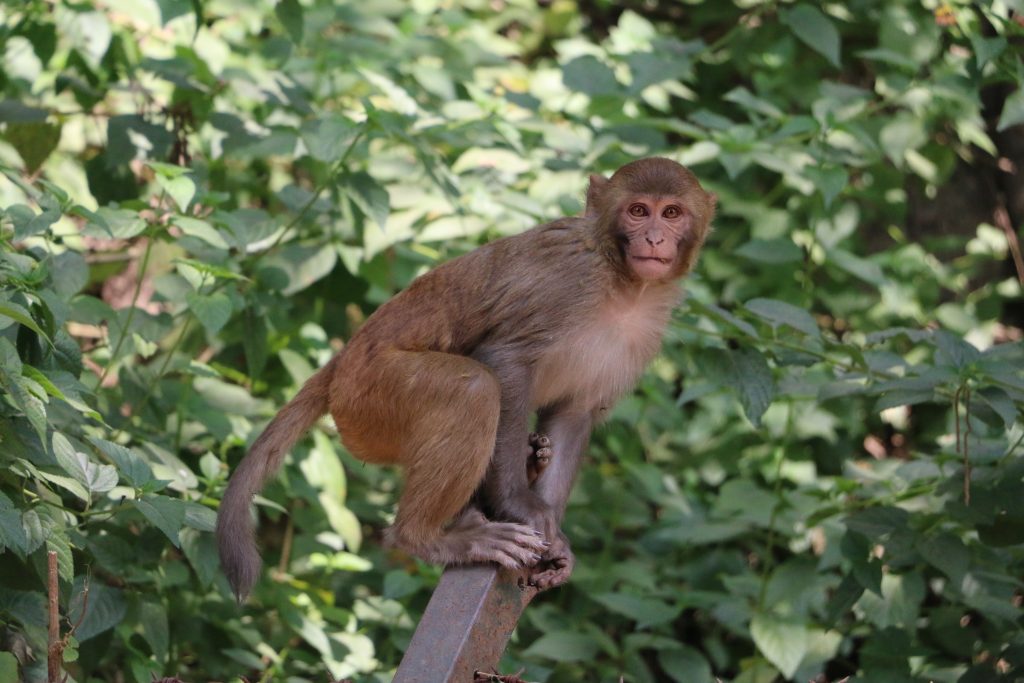 After our tour, we had dinner at a local restaurant called Nepali Chulo. Located in a 200 year old building built by the Rana Regime, Nepali Chulo provides customers with typical Nepali & Newari food along with Traditional Nepali Cultural dance and folk music. As we didn’t have much time to experience the local culture in Kathmandu, I thought this was the perfect introduction. 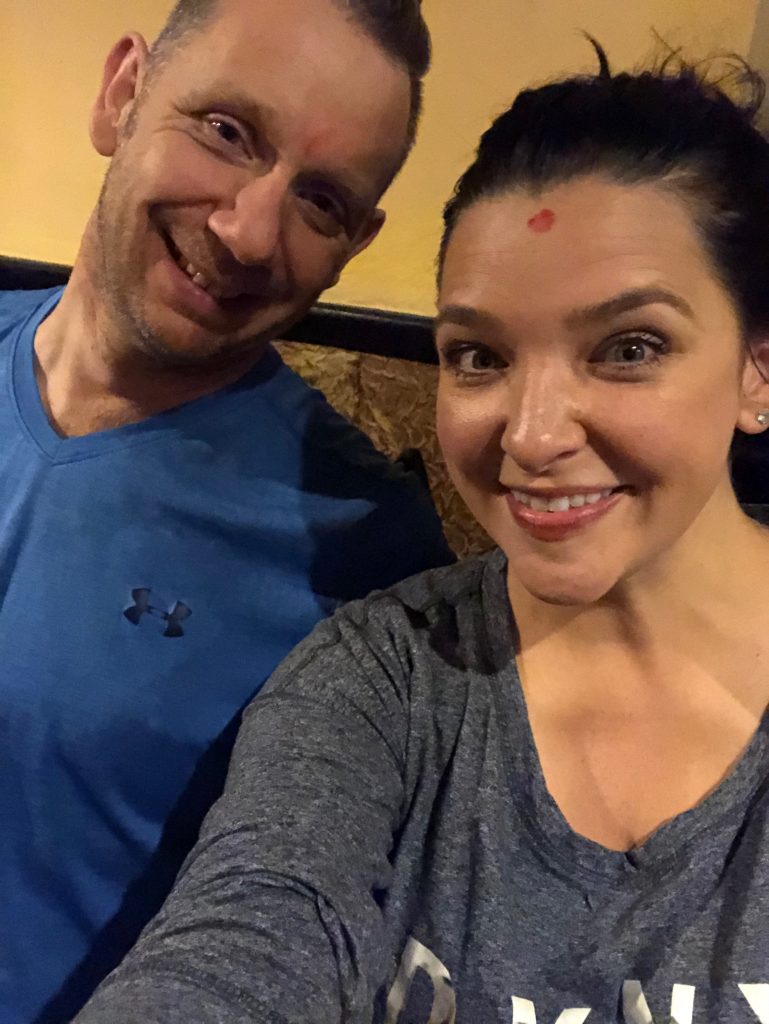 After our dinner, it was time to double check our bags and rest for the next day. Our official day of our trek. We were set to leave the hotel at 5:30am to fly to Lukla. There are truly not enough words to describe how nervous I was. I didn’t know what to expect. What was to come. I had never completed a major hike much less faced the altitude changes that were to come. 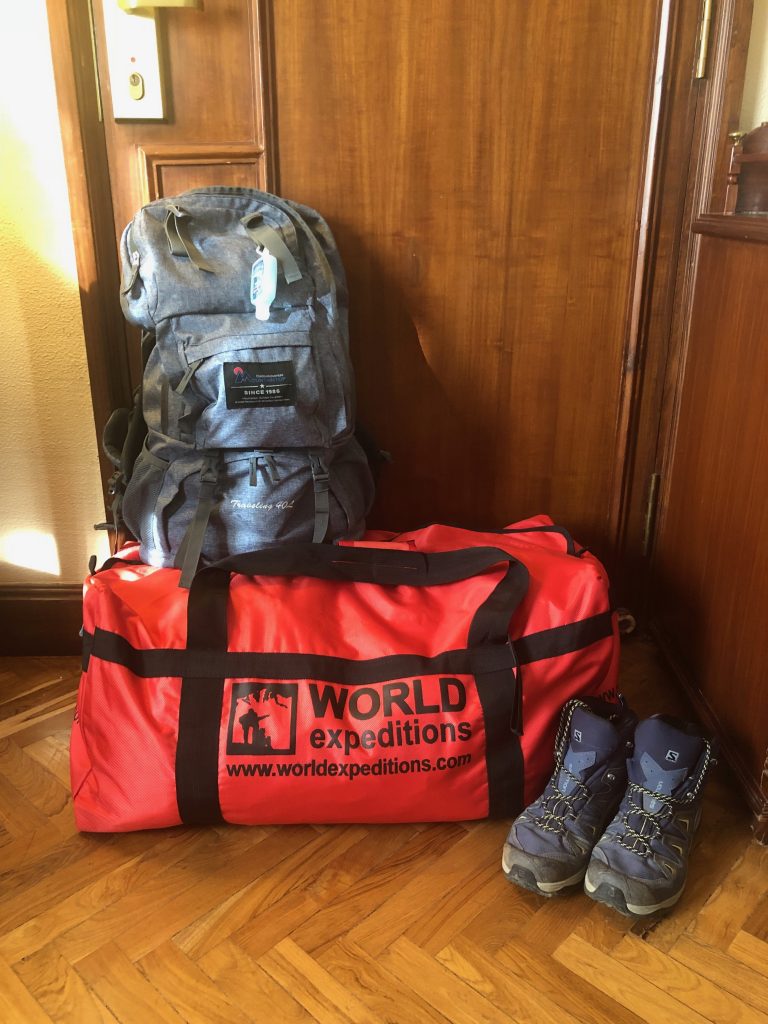 My only regret is that I didn’t have enough time in Kathmandu before our trek to Mt Everest Base Camp. I do plan on returning in the future because I know there’s so much still to see and experience.

I look forward to sharing more about our experience.

Check out part two in ‘My Journey through Nepal; https://passportsfromtheheart.com/2018/12/a-journey-through-nepal-lukla-to-ghat-to-monjo.html

This trip was part of a fundraiser benefiting Cancer for College. There’s still time to donate -> https://www.classy.org/campaign/hike-for-hope/c154942

A Journey through Nepal: Lukla to Ghat to Monjo

A Journey through Nepal: Lukla to Ghat to...

Training for Mt Everest Base Camp with BodyArmor

My Journey to Mt Everest Base Camp (5...

Fascinating sequence in itself. I like that you arrived early to acclimate for the upcoming trek and we’re able to observe local culture.