Running from the Heart…For the Mind (Guest Post – Alzheimer’s)

I’ve been a long time supporter of Jason Boschan from Run4Papa,  He’s an inspiring man who dedicates himself to a very important cause. Raising funds for Alzheimer’s. Recently Jason participated in the Hatfield McCoy Marathon which takes runners thru West Virginia and Kentucky. Bruce Justice from the Appalachian News-Express in Eastern Kentucky shared this incredible piece with us, of running from the heart. For the Mind. It is about Jason and his journey with Run4Papa. Thank you, Bruce, for your guest post.

Running from the heart…for the mind
By Bruce Justice

Alzheimer’s is the only disease among the top 10 causing death that can’t be prevented. It can’t be cured, and can’t be deterred even with treatment. Currently, more than five million Americans, primarily those 65 and older, have it. By the year 2050 someone in America will develop the disease every 33 seconds.
This year alone it will cost the country $236 billion in care, treatment, and research. And the grimmest statistic of all: Alzheimer’s will kill more people 2016 than breast and prostate cancer combined. 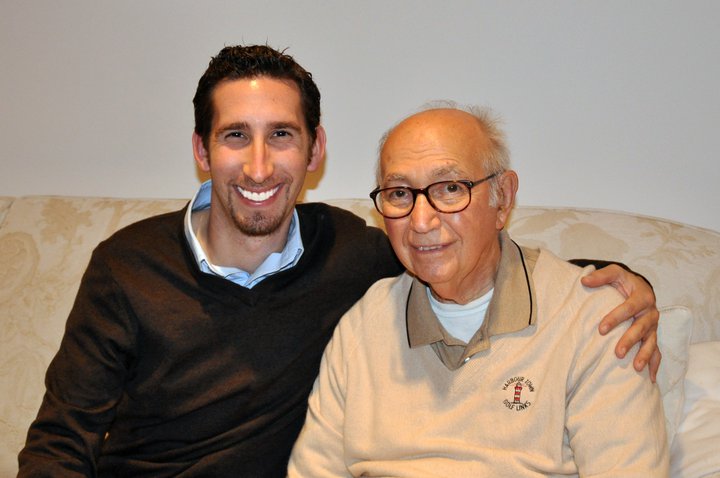 In September 2013, the disease finally claimed the grandfather of Charlotte, N. C. resident Jason Boschan. Dr. Louis “Papa” Heyman—who prior to his illness had been a practicing pediatrician for more than 50 years—was first diagnosed in 2005 at age 80. Which is why, Boschan says, he began a worldwide awareness/fundraising campaign two years prior to his grandfather’s passing called “Run4Papa.”

Not so much because he felt it would save his grandfather’s life. No, but because he believed it might help prevent the future deaths of countless others.

This somewhat ambitious crusade essentially entails him running in marathons all over the world as a means to bring about awareness for the disease. As well as a vehicle to raise at least some of the money it’s going to require to find a cure.

“I watched it progressively take away the person I had known all my life and that’s a very hard thing for anyone to have to do,” Boschan said last Friday in a phone interview from his Charlotte home.

“It’s very difficult for the person who has it, unquestionably. But in a way, it’s equally or even more difficult for that person’s family.That’s why I began Run4Papa. There are millions of people all over the world suffering from some form and severity of dementia, whose families are going through what mine did. I just wanted to help bring about awareness and raise all the money I could for research.”

Although Boschan furthered the cause recently in both West Virginia and Kentucky when he participated in the Hatfield McCoy Double-Half Marathon, he says Run4Papa was coincidentally rooted in London, England, years before his grandfather had even been diagnosed with the disease. What’s more, the methodology by which he would raise money and bring about awareness—running marathons all over the world—was more or less happenstance as well.

In 2000 he was a student at the University of Michigan in Ann Arbor and wanted to expand his educational horizons by going abroad, an opportunity which ultimately presented itself at University College in London.

“The time for my studies to begin in England and the London Marathon closely coincided,” he said. “So before leaving I told my friends in Ann Arbor that I was going to run the marathon while I was there. Which was kind of surprising to them because I had never run in a marathon ever before. I was in good physical condition because I played a lot of intermural sports. And I really thought I could do it. So when I got there I contacted race officials and told them I wanted to sign up.”

There was just one hitch perhaps only a novice runner would not have counted on: A two-year waiting list that ordinarily could not be circumvented. Although disappointed, being the stubborn Yank he was Boschan remained undeterred. While trying to figure out another way to run the marathon, one day by pure chance he picked up and read a magazine. Among other notable bits of information, the magazine contained an article about a charitable organization known as the Notting Hill Foundation which each year reserves 50 spots in the marathon for runners willing to raise 750 pounds (about $1,500) for its cause—the disabled children of Notting Hill.

“I immediately contacted the foundation and told them I would raise the money, which I did and that ultimately got me one of the 50 spots,” he said. “I ran the race and managed to do it in a little less than five hours, which was considered very respectable. ”

“While I felt a sense of accomplishment for actually doing it and relief for fulfilling my obligation to the disabled children foundation, especially since I had only trained for three days when I crossed the finish line I told myself I would never do it again. And for the next 10 years, I didn’t.”

In need of a catharsis

In early 2010 Boschan suffered a shoulder injury that would require nine months of rest and rehabilitation. By that time, his grandfather’s condition was also worsening. Not surprising, both events together were clearly having a negative effect on his outlook. He needed something to help him refocus. Once again, and coincidentally and fortuitously enough, this time that something came in the form of a phone call from a friend.

“This friend calls me up and asks if I wanted her spot in the New York Marathon. She said she had 100 people lined up to take it if I didn’t want it,” he said. “Since I thought it would be a good gauge to see if I had recovered from my injury. It also served as kind of a catharsis to get my mind off what my grandfather was going through. I decided to take it.”

It was during this race in November, Boschan says, that the idea of initiating a movement for dementia took hold in his mind.

Following the race, he told his brother about his idea. His brother, in turn suggested that if he was really serious about it there likely wouldn’t be a better place to launch this personal cause than at a marathon at the Great Wall in China, scheduled for May of 2012.

Beginning with the purchase of the run4papa domain name in early 2011, and after launching the campaign in July of that same year, Boschan spent the next 315 days raising money and seeking out the best possible research center with which he could make a foundation partner. He ultimately chose the Cognitive Neurology and Alzheimer’s Disease Center (CNADC) at Northwestern University. He also managed to exceed his original fundraising goal.

“My goal before the Great Wall Marathon was to raise $10,000 by running in a series of 5Ks and 10Ks in communities across the country,” he said. “But it went far better than I ever expected because we raised $50,000. So after that, I thought maybe this would not be just a one-time thing.”

“The truth is there were just so many people I met who had their own Alzheimer’s stories and who wanted to become a part of what I was trying to do. Even though I knew it was going to be too late for my grandfather, I also knew it was no longer just a campaign for him but millions of people, so I decided to continue with it.” 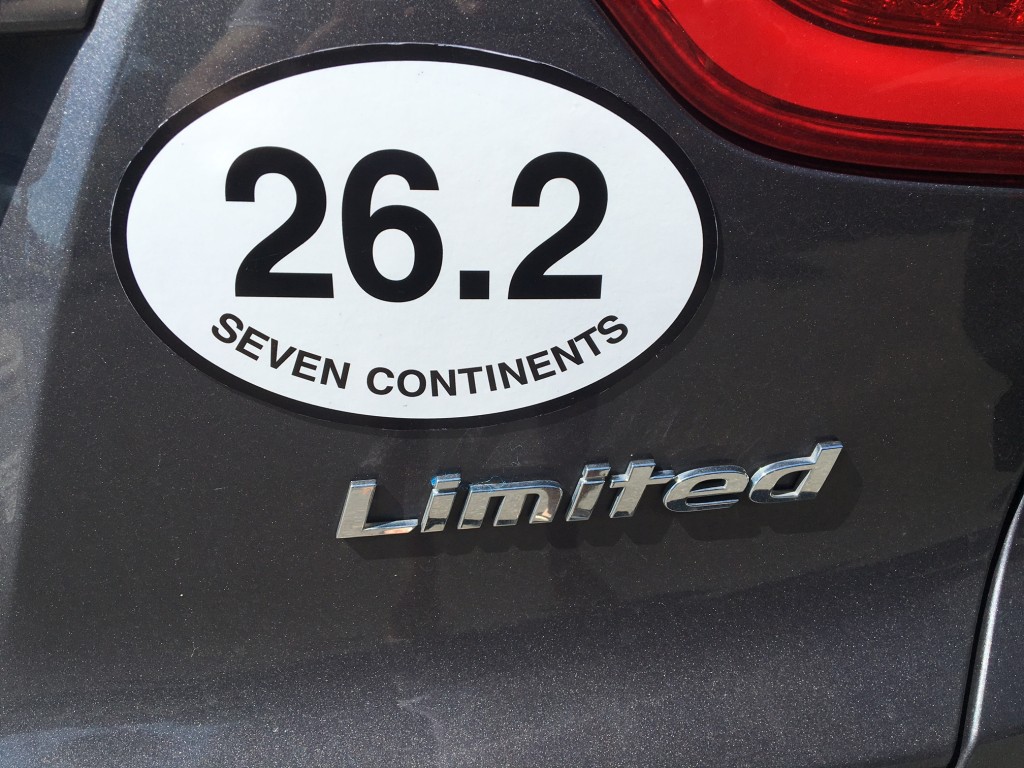 Boschan said he has run in seven major marathons since first getting the idea at the New York Marathon in late 2010. These other races have been on all seven of the world’s continents and include the London Marathon (Europe); the Boston Marathon in North America. (He has run this race twice, the first time in 2013 during the terrorist bombing attack); the Great Wall Marathon (Asia); the Rio Marathon (South America); the Outback Marathon (Australia); the Big Five Marathon (Africa), and the Antarctica Marathon (Antarctica).

Boschan said the primary way he chooses a marathon—a really good marathon where the cause for Alzheimer’s can be further advanced and he as a runner can be really challenged—is by going on the Internet and searching until just the right one comes up.

While recently researching the locations that would suffice for both goals, he came up on the Hatfield McCoy Marathon. After reading about the hospitality of the area’s residents. The scenic beauty running parallel to the 26.2-mile course. And the various race events with different levels of difficulty — particularly the double-half marathon — he knew it had to be included on his list of endeavors. 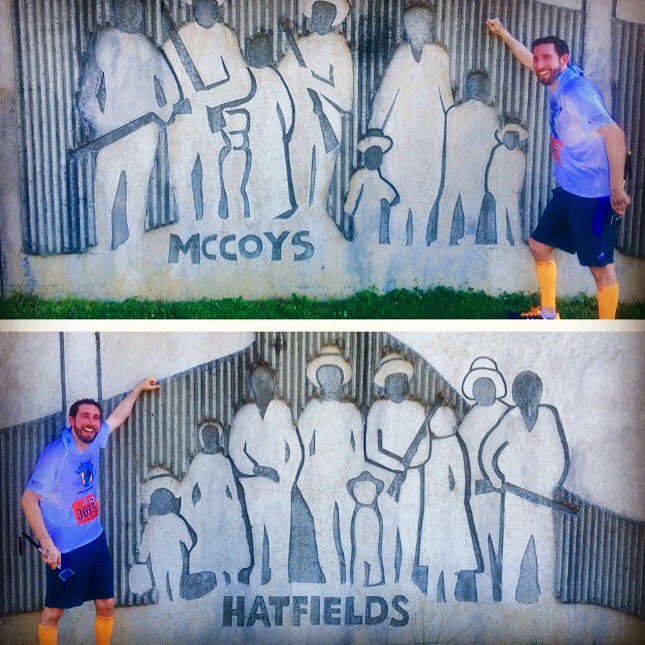 “I just thought everything about (the Hatfield McCoy Marathon) was so cool. Especially the double-half involving two different states,” he said. “I had never heard of that before and I just found it fascinating and wanted the opportunity to do it. “And because the goal is to raise awareness. A bonus is I’ll get the chance to do that in two states as well. I also love the history of the feud and everything else about the area. So the decision to go there and be a part of it all was a very easy one to make.”

“Every dollar raised goes to the research center and nothing goes toward funding my trips to these events,” he said. “I pay all my personal expenses out of pocket. I think most people probably already know that. But I always try to make sure everyone knows exactly where all of the money actually goes.”

Another question he gets is from people who aren’t necessarily able to contribute financially but who want to know how they might still get involved with the campaign. 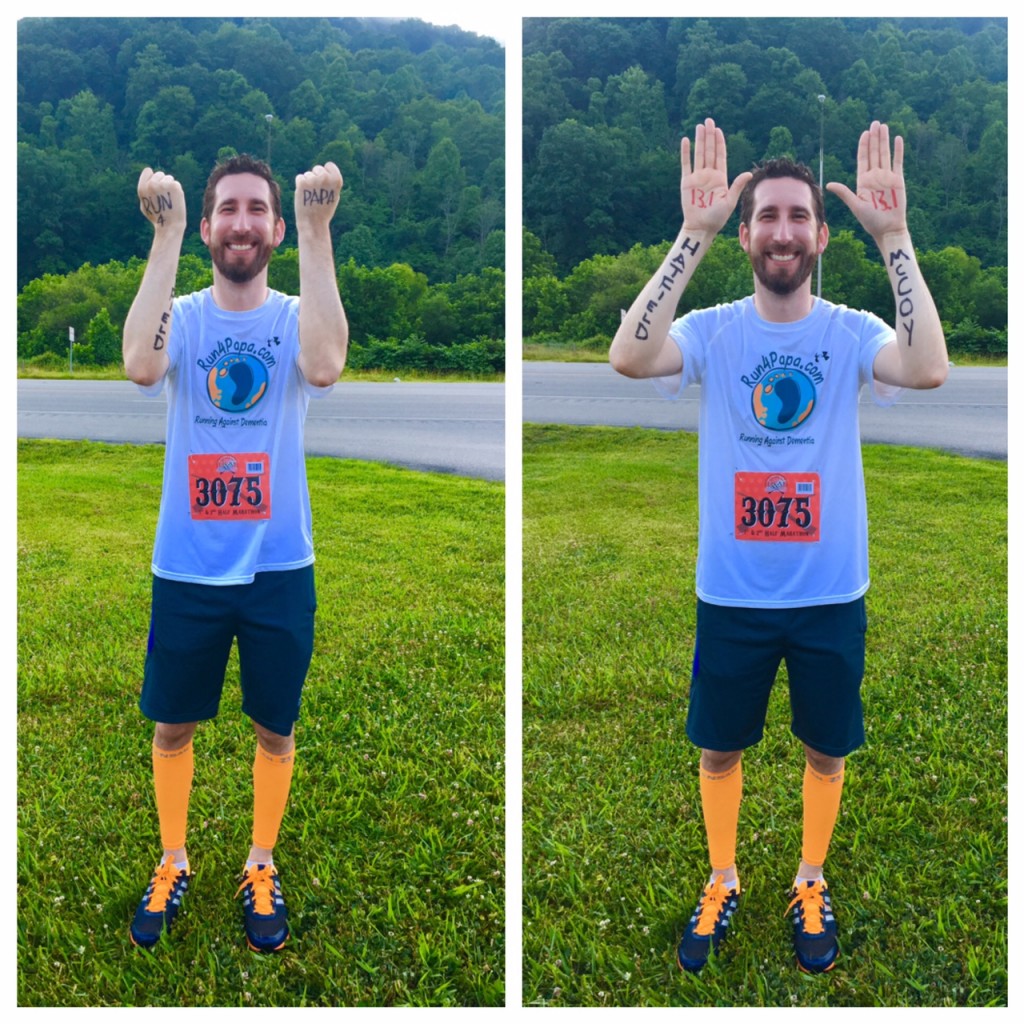 “Besides the apparel I wear that has everything about the foundation on it, I always have ‘Run4Papa’ written on both hands,” he said. “Whether they’re running in a race or out helping in some other way. I tell them they can write these words on their hands in a show of support. “I tell them to take a picture that displays the words written on their hands. Or wherever else they choose to do it. Then send it to the website where it can be added to a photo gallery.”

“It might seem like a small gesture. But because I now have hundreds of these pictures on the site from people all over the world it really does perpetuate the support.”

For more information about Boschan and/or the Alzheimer’s fundraising campaign go to www.run4papa.com. And thank you again, Bruce, for your guest post on Running from the Heart… For the Mind.

Walking the ‘Invisible Path’ with Shedia in Athens,...