by Amelia Old January 15, 2016 1 comment
Several years ago I saw some tweets from a man named Jason Boschan. He was promoting a fundraiser for his organization Run4Papa in Charlotte, NC. Consequently, I contacted him to set up a meeting as everyone knows I’m constantly looking for incredible groups to align myself with and he seemed to have a great mission. My meeting with Jason lasted hours as I was completely mesmerized by the passion he had for his cause – Dementia. 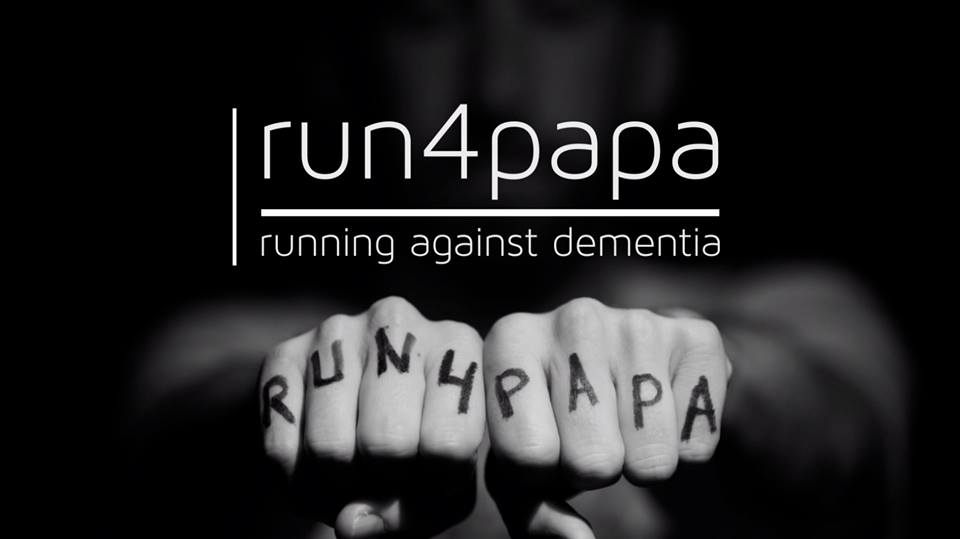 Not only that but his positive attitude towards living your dreams was incredibly thought-provoking. He said to me “if money weren’t an option what would you be doing?”. I immediately chimed in with “International Nonprofit”. That’s where my heart was and it is partly because of Jason that Pretty in the Queen City eventually led to having a big focus on Philanthropy.

Jason took time to answer some questions about Run4Papa. I hope you find him just as inspiring as I do. 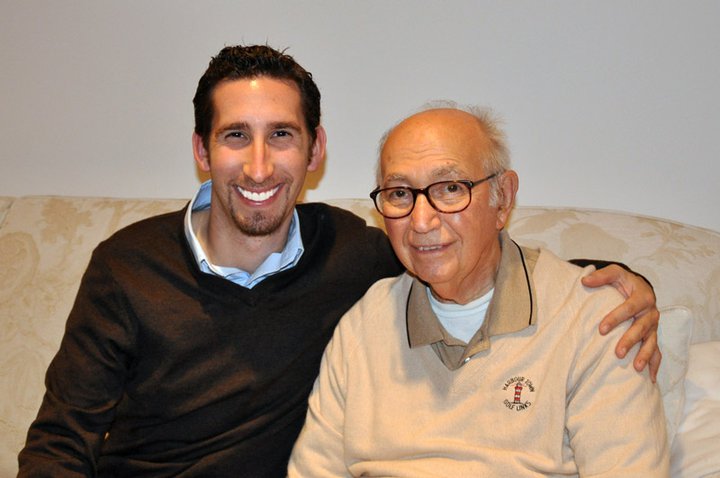 You’ve made great strides to bring awareness to dementia thru your organization Run4Papa. What led to the decision to focus on this issue vs others?

Back in 2010, my “Papa,” a pediatrician of 50 years was diagnosed with a rarer form of dementia called Primary Progress Aphasia (PPA). PPA makes a person progressively lose the ability to communicate and comprehend language. This was truly heartbreaking because all my life, I grew up with a man who genuinely cared about easing parents fears regarding their sick children and helping make them healthy again. He was so inspirational that I was determined to raise dementia awareness and funds in his honor while he was alive.

And out of that idea came Run4Papa. My initial goal was to raise $10,000 over the course of a year in his honor by partnering with Northwestern University Medicine. During this year, I would run races all of the U.S. (5K’s – Half Marathons) in preparation for the culmination race which took place on the Great Wall of China. And yes, there is a marathon on the Great Wall! You can check out my race video here

During that year, I met so many families and patients who were impacted by Alzheimer’s and other related dementia that I decided to continue pursuing raising awareness around the globe by running a marathon on every continent! Sadly, my “Papa” passed away two years ago to this brutal disease. He said,

“Jason, I know the money you raised so far will not save my life. But it will save the lifes of your parents generation. Or your generation. So please continue forward when I am gone.”

While it brought tears to my eyes, it was the greatest level of inspiration I could have ever received from a man I admired all my life.

You’ve told me in the past-you ran a marathon without training. Please explain!
This is true and something I would not recommend for others. Back in 2000, I ran the London Marathon without training. I ran three days prior to the race (10 mins – Day 1, 20 mins – Day 2 and 15 mins on Day 3). I have always believed running a race, especially a marathon, is 80% mental, 20% physical. Since completing the London Marathon in 4:57:57, I was convinced that the mind and body can do almost anything together in a race and have never felt the need to truly train in the physical sense. While my body is no doubt a freak of nature, I do believe mental preparation is key and take that approach very seriously. I visualize what is ahead (no matter how short or long the distance), listen to my body (no music during the race) and feed off the energy of the crowd. To date, this has worked well in some of the biggest venues on the planet from Boston Marathons to the Outback Marathon.

You are partnered with the #1 PPA research facility in the world, Northwestern University’s Cognitive Neurology and Alzheimer’s Disease (CNADC) Center. In 2012, you were the youngest person to be appointed to their Advisory Board. How did this come about and how did this accomplishment make you feel?

In 2011, Northwestern University and Run4Papa hosted a fundraiser together in the Windy City during the weekend of a tower race called “Hustle Up the Hancock”. This race took place in the Hancock building and challenged runners to race up 94 flights of stairs! I figured that if I was unable to do this successfully, it would be a major problem considering the Great Wall of China had 5,164 steps to ascend and descend along the way! The fundraiser had a tremendous turnout and after the night was winding down, I was walking back with my friend Kevin who had supported Run4Papa at Northwestern CNADC from the beginning and he said, ” We want to extend you the opportunity to be on our Advisory Board.”

To say I was in shock and beyond humbled is an understatement. After the shock went away (several months later). I realized that serving on the board came with important responsibilities and decisions for families and patients who are battling Alzheimer’s and other related dementia. My immediate goal was to fund an innovative clinical trial on an annual basis on behalf of Run4Papa and those supporting this cause. I am very proud to say we have accomplished that goal year in and year out.

Many people have the desire to give back. However, lack the confidence in themselves in understanding they can, in fact, make a difference no matter how big or small the project. 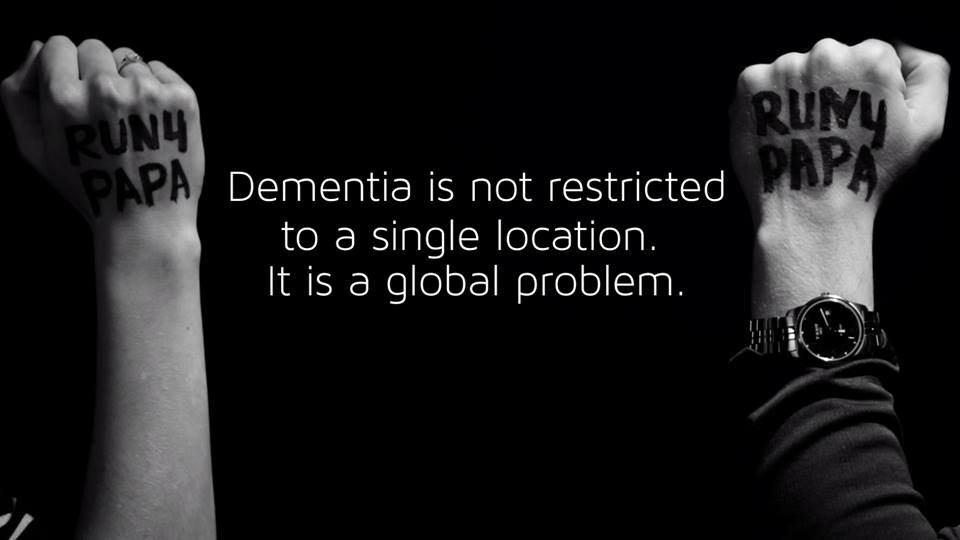 What piece of encouragement could you provide to those who may need a little push in ‘giving back’ to their community or to a cause close to them?

I hear this on a weekly basis from people all over the world in emails, on social media platforms and during phone calls. It can be daunting to start something from scratch in hope of total strangers coming on board with their support. If you have the desire and motivation to ‘give back’ no matter how big or small the project, it is up to you to put that idea into action. Often, people think that it all has to happen at once. They have this vision of what they would like to do, but sadly, it remains inside their creative brain.

My advice: take the initial leap and believe in your ability. If you look forward through the windshield instead of the rearview mirror, I guarantee you are going to create a positive impact in your life and others. I never imagined that Run4Papa would take me all over the globe. Running in races and places I only dreamed of in my mind. I feel so lucky to continue raising awareness for this cause and many more plans ahead!

In 2016, I am looking to achieve three major goals:

1. Help raise funds to build a NEW state-of-the-art dementia research facility at Northwestern Medicine. By doubling the size of our current space, we can reduce the wait time by months for patients and families to see doctors. We can hire more researchers to run clinical trials and study the disease. We can move the needle on reaching a cure that much sooner in our lifetime.

2. Complete my goal of running a marathon on all 7 continents! In March, I am flying to one of the coldest places on earth and running the Antarctica Marathon. And yes, they do have a marathon Antarctica! In November, I am going to head to Athens, Greece where the marathon started many centuries ago to run on the 7th continent on behalf of Run4Papa.

3. Develop a plan to become a motivational speaker and dementia advocate on a global level. I have always felt a strong connection to advocating for more dementia awareness and research. And truly, I feel that I can inspire people to participate in their own special and important ways.

Any last words?
I encourage everyone to take a couple minutes today and ask yourself this question:

If you won the lottery tomorrow and money were not a factor in your life, what would you do with yourself?

Once you have that answer, that is really what you should be doing with your life.

To learn more about Run4papa, and how to help to battle dementia, please visit www.Run4Papa.com

Have You Heard of a Place Called Moldova?

A Valentine’s Weekend with Molly Ringwald

Walking the ‘Invisible Path’ with Shedia in Athens,...